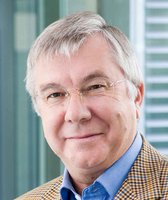 Rainer Blatt has made seminal contributions to quantum optics, precision measurement and quantum information with trapped ions. His work is among the greatest advances in atomic physics and experimental quantum information of the last decade. Setting the stage for these recent achievements, his early work in quantum optics included the observation of quantum jumps of a trapped ion in Hamburg, and the laser cooling of neutral atoms in a chirped beam slower during his time as a postdoc. Atoms trapped in an ion trap have become the leading platform for quantum information processing starting from the mid-1990s when theorists Ignacio Cirac and Peter Zoller proposed a quantum logical gate for this system. Rainer Blatt was one of the first to realize the remarkable potential of trapped ions for quantum information processing [1]. Experimental implementation of quantum logic operations with ions required overcoming formidable challenges. In 2004 Rainer Blatt’s group succeeded in transferring the quantum information of one atom onto another atom in a totally controlled manner (quantum teleportation). Although several other platforms for quantum information processes have been proposed and pursued experimentally, Rainer Blatt’s group have championed the “scaling up” race by demonstrating entanglement of eight atoms in a controlled manner in 2006. Creating such a first “quantum byte” (qubyte) was a further step on the way towards a quantum computer. In 2011 the Rainer Blatt managed to push this record to 14 entangled atoms.

The experiments on demonstrating high fidelity entangling gates between trapped ions, and quantum information applications involving several ions, such as deterministic teleportation, put Rainer Blatt in a scientific leadership position in this very competitive field. His list of achievements in this context goes from the early implementation of demonstrating quantum algorithms, showing entanglement and tomography of up to fourteen ions, all the way to his recent experiments on error correction.

During the last six years Prof. Blatt made seminal contributions in (digital and analog) quantum simulation of trapped ions. A few years ago he was the first to demonstrate simulation of simple one-particle phenomena like the Dirac equation and the Klein paradox [2, 3]. His work on demonstrating the first digital quantum simulator in the laboratory [4], his demonstration of a toolbox for open system quantum simulation with trapped ions [5] and his realizing repetitive quantum error correction [6] constitute truly outstanding scientific achievements. At the heart of these experiments is the remarkable accomplishment of being able to routinely perform sequences of 100 quantum gate operations on a set of a few ions, implementing this way nontrivial quantum computation tasks with high fidelity. This achievement has opened the door to a next generation of quantum information experiments with trapped ions beyond the proof of principle experiments. Prof. Blatt’s effort during the last few years is much broader than digital quantum simulation per se. It also includes basic development of trapped ions as a scalable device for quantum computing [7, 8]. In particular, this award also recognizes his implementation of quantum gates with a topologically encoded qubit [9], and an analog quantum simulation of spin models with trapped ions in which his group has shown entanglement of quasiparticles (magnons) in quench dynamics with long range interactions [10].

The work of Professor Rainer Blatt has led to the most successful multi-particle quantum information processor to date, based on trapped ions. It is a remarkable demonstration of the power of entanglement foreseen by John Stewart Bell. Quantum simulations developed by Rainer Blatt are helping make experimental quantum information processing a reality.

Main references to the work for which the prize is awarded